Norakuro is a black dog enlisted in the "Mokenrentai" (Fierce Dog Brigade), an Imperial army of dogs fighting in a war against the enemy Monkey Army.

Norakuro is a stray black-and-white dog in an army of white dogs who blundered his way while being a Private Second-Class.

This series was relatively faithful to the comics. One big change, however, was the addition of the army nurse Miko, whom Norakuro had a crush on. For this series, Norakuro was voiced by Nobuyo Ooyama, who would later become noted for voicing Doraemon. 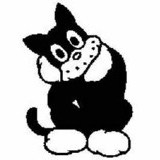