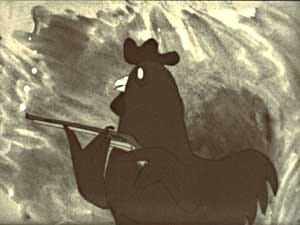 In the summer of 2000 in Hollywood, Spielberg's Dreamworks Film Corp. made the film "Chicken Run" with Nick Park, the great master of clay-figure animation, and it became a big hit. A chicken was the main character, and the story unfolded like the masterpiece "The Great Escape." Thirty-five years ago, Mushi Production created an animated work in which a chicken was the main character and a rebellion between the rulers and the ruled eventually escalated into a great war. Despite the scale of the story, the film ran for only three minutes. The ability to depict the endless repetition of war in human history in just three minutes is a unique feature of short animation, relying on exaggeration and great imagination.