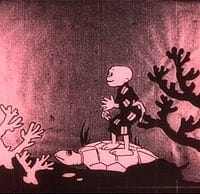 Urashima Tarou is based on a well-known Japanese folk tale about an honest fisherman who is invited to an underwater castle after saving a sea turtle on a beach from bullies.

Note: The latest research has revealed that the film identified on this website as Urashima Tarou (supposed title), which was so named on the basis that it was believed to be a work by Seitaro Kitayama that was originally released in 1918, is actually a different film. Read more...

Note: Urashima Tarou (supposed title) is tinted in pink film. Not to be mistaken with Urashima Tarou (1931) which is a black and white film.
This site uses cookies. By continuing to browse the site, you are agreeing to our use of cookies. Review our Cookie Policy for more details.